Remember this tutorial post on how I made my grand-nephew a piece of art? Well here's an update! My niece and her husband loved it! YAY! Also, I've made a couple more since making that one for some friends that are having babies. They have loved theirs as well!!

Here is the first girl version:

For this one I used canvas stretched over a thin frame. 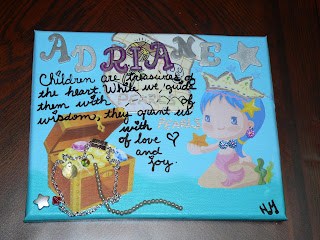 I used two different shades of blue for the background - a lighter one for the sky and darker one for the sea. I just made the "line" separating the two colors wavy as if it were waves in the ocean. Then I covered it in Mod Podge. The pictures (treasure chest, map and mermaid) are all clip art that I printed from my computer. Before I printed the mermaid up I altered the clip art so that she would have a crown on her head. I did this using a clip art crown that I sized correctly then copied. I did a right click over the mermaid to edit, and pasted the crown onto her and made sure it went to the right place on her head. 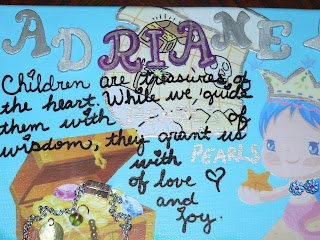 The pictures were glued on with more Mod Podge. The map was glued down over the top of the canvas frame as well. Once that was dry I added silver around the map and the mermaids crown using a paint pen. Then there was another 2 or three coats of Mod Podge put on top of the whole thing. While that was drying I painted the wooden letters. After the canvas was dry I added the words written by hand. My handwriting isn't the best in the world.... I would have printed it up with a fun font but I wanted to see the pictures through the words. 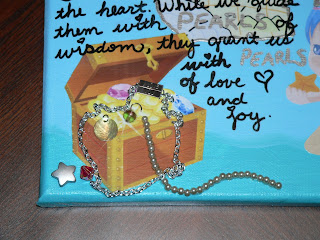 Next I added all of the stuff in the treasure chest by gluing it all on with E6000. That is seriously my favorite glue ever. The part that says "I LOVE YOU" is actually scrapbooking staples that I poked through the links in the chain and then through the canvas. 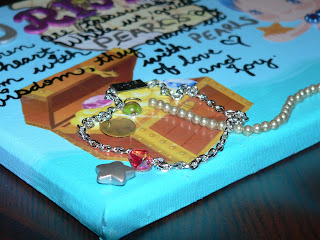 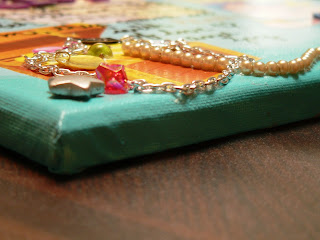 I also put E6000 glue on the chain in a few places to make sure it would stay in certain areas, but some of it is loose too. The "pearls" are glued on individually as are the beads, "earing", and the real mother of pearl shell piece (again with the E6000).

For the mermaid I added a flower charm for an earring and two more for the bra. I broke off the loops on the flowers for the bra using a needle nose plier and attatched them using E6000. (I did mention I love this stuff, right?!)

Here is another one I made:
For this one I used canvas glued onto cardboard. This is also known as "hardboard" or "chipboard". 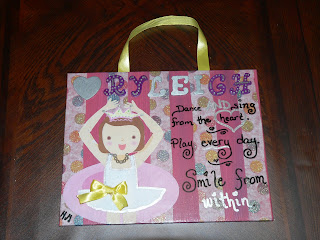 I painted the entire background a dark shade of pink. While that was drying I took some super fun tissue paper from a gift I had recieved at my baby shower and cut it into somewhat sloppy strips. I LOVE to upcycle whenever I can, and I thought it was fitting that the gift came from my baby shower for my youngest girl and this was a gift for a friend for her first child, which is a girl.

Once the pink paint was dry (which didn't take long since it's acrylic paint!) I put a layer of Mod Podge down and VERY carefully layed the tissue paper strips down leaving approximately the same width of space between strips as the strips are wide. (I don't remember how wide the strips were...but I think they were close to 3/4".) 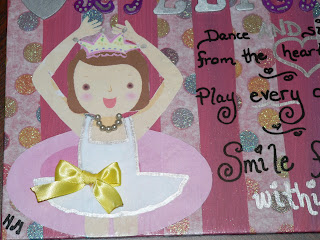 I added another layer of Mod Podge once the strips were secure. Next came the ballerina girl from clip art that I printed in color. Before I printed her up I altered the clip art so that she would have a crown on her head the same way I did with the mermaid. I cut her out and glued her on using more Mod Podge (I love this stuff just as much as E6000!!). Once she was dry I used my silver paint pen to outline her dress and color in the dots above the crown. 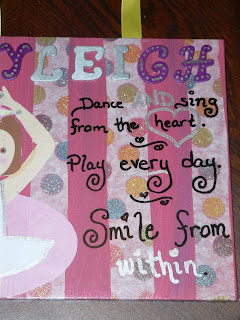 I then added all of the words. Again, excuse my not so fantastic handwriting. Next came a couple of coats of the Mod Podge covering the whole thing. While this dried I painted the wooden letters for the name and the wooden heart. 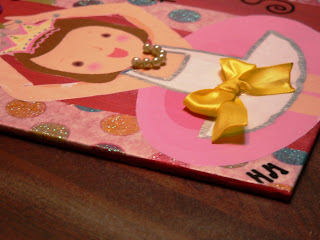 Once the Mod Podge coats were dry I added the pearls for the necklace and the yellow bow onto the hip of the ballerina using E6000. 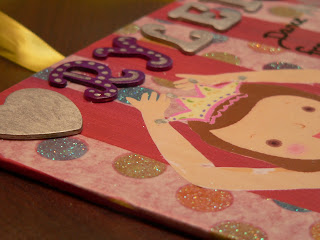 Finally, I glued on the heart and letters for the name (also using E6000)! Once that was dry I added the ribbon, gluing it on to the back of the hardboard so that it could be hung up if my friend wanted it to be (more E6000). By the way, the bow and the hanging ribbon were made using the last little scrap of yellow ribbon I had left from a different project. This is a great reason to keep scraps!

Aren't they Fun? Go ahead and give it a try! I don't think you'll be disappointed. They really are cute and super easy to make!
Posted by 3Giraffes at 8:00 AM