Bleached Out and Painted Shirt

I saw this site, and thought it would be really fun to try out. Although, I knew it could be a disaster. I mean... Me? I'm clumsy. Creative, yes. Graceful, yes. But also clumsy. Using a shirt and making something that actually looks cool using bleach might be a little too much for my butterfingers to handle. But it just looks so fun. So I had to try it!!

Oh the options and ideas!!

So I wanted to combine all of these in my own unique way.

I started out with a brand new shirt. I figured this would give me the best color differences, and since the shirt would not have been worn already, if  I messed up I wouldn't do too bad of a job with the bleach/water mixture and weaken the fabric to the point of holes. Hopefully. Although after I've done this once I think it would be fine to do with a gently used shirt.

I sketched out what I wanted to put on the shirt. In this case I drew directly on the freezer paper on the paper side. I used this picture and this picture I found online as inspiration. (I used google image search and the keywords bird in a tree, then clicked the "cartoon birds in a tree" option.)
Then I very carefully cut out the image. I just used a pair of kids scissors. You could use regular scissors or an exacto knife or razor blade, or whatever you think would be best for your project. Since I decided to use the tree itself for a reverse stencil type thing, it didn't matter that I cut out out like that. But for a regular stencil I would probably use an exacto knife. (Or cut into the center and cut away what is not needed.)

Then I had to iron it on the shirt. 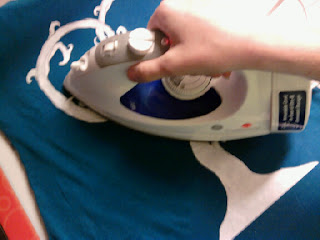 Once the stencil is ironed on the shirt (or whatever you're putting it on), it can be set aside.
The next step is to mix up the bleach and water and put it in a squirt bottle. I used 1:1 bleach to water. In retrospect, I think I would use a 70% 30% solution next time - 70% water to 30% bleach. You'll see why in a minute. So, mix up the bleach and water and put it into a squirt bottle. I bought a super cheap (97 cents at Walmart) squirt bottle to use. Great price, but I should have figured out exactly how well it works BEFORE filling it with bleach and aiming it at the shirt. 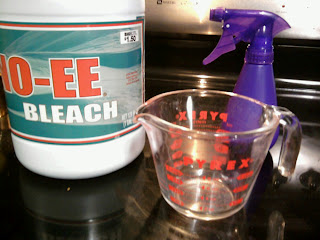 Then I put some butchers paper inside the t-shirt, placed it in the tub, and aimed my squirt bottle at it. In retrospect I should have ironed on some wax paper to the inside of the shirt as well. I didn't think about the bleach water potentially leaching through the butcher paper and getting into the back of the shirt. I was planning on taking a picture of this, but..well...things happened very fast from here! (Back to the I should have figured out how well the squirt bottle works before doing this experiment.)

I apparently opened the squirt nozzle too much and had it doing a strong precise streaming aim, instead of a misting aim. OOPS! I wanted, and needed, a mist. So while I was figuring out how to fix this problem  I had bleach water soaking into parts of the shirt, and, unfortunately, soaking the freezer paper as well. I had to work quickly to figure out what went wrong. Lesson learned for next time! So, I finished squirting the area I wanted bleached, and the paper was soaked in the process, and was left to soak for too long (thanks to not knowing what I was doing). Like I said earlier, I would do a 70/30 solution next time instead. I think I would have better control over the bleaching process that way.

So, yeah. VERY fast is how this all happened. Before I knew it I had to rinse the shirt or risk not having a shirt left. NO time for pictures here. I'll hopefully get one next time I try this.

Unfortunately the bleach being so strong, and me not knowing what I was doing, meant that the shirt did not turn out how I had planned. However, I think it still looks pretty neat. After thoroughly rinsing the shirt in the tub I threw it in the washer (with some other stuff that needed to get washed anyway...I don't have time to do one shirt at a time in the wash!) and only used laundry detergent - no fabric softener. Since I'm not done with the shirt yet, I don't want to put anything into the fabric that might thwart paint adhering.
No picture for the washing and drying steps since looking at my washer and dryer is the last thing I want to do, so I'm sure you don't care to see it.

While the laundry was going I sketched up two birds ("love birds") to use as freezer paper stencils. This time not caring about the birds that gets cut out, only the part that they get cut out of. 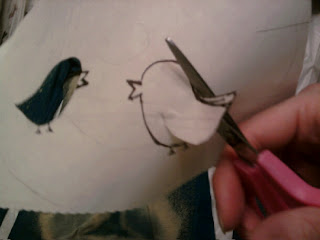 Here's what the shirt looks like all clean and dry.

Then time to iron again! (Let's all shout for joy.."yaaaaay") The new stencil of the birds had to be ironed onto the shirt in the right place. This meant a lot of laying it down, and slight adjustments to make sure it was correctly lined up.

Put wax paper (wax side facing UP) inside the shirt so that the paint doesn't bleed through. I used glittery "puffy" fabric paints instead of fabric paint pens. Why? Because I want the birds to kind of... standing out. Not be flush to the shirt. I painted one with a mixture of plain magenta puffy paint and purple sparkles, and the other with a mixture of blue puffy paint and green sparkles. 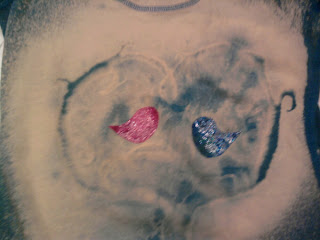 I decided to outline the entire heart tree with a permanent marker. The wax paper inside the shirt comes in handy here as well to make sure the permanent marker doesn't bleed through the paper. Instead of permanent marker you could also use a fabric paint pen. I used a brown permanent marker, but it looks more like black (in the picture, and in person). Since I no longer had the stencil (it fell apart when I rinsed the shirt in the tub) I had to rely on my memory of what I drew, and the faint lines I could see. I also had to change it a little here and there from the original to make up for the changes that happened in the bleaching process. 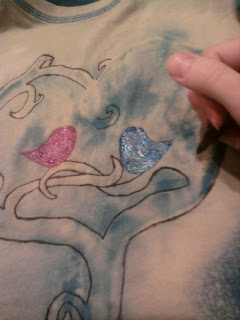 For the feet I used a permanent fine point black marker.

For the beak I did some hand stitching. I don't really know how to explain what I did since it was basically free-form/free-hand with no real plan.
For the eyes I used a super fine tipped permanent marker for each one. I know, not exciting. I might add a bead or rhinestone later. We'll see.

Here's a couple pictures of the completed shirt.
I really love how the shirt ended up!

See how the sleeves hit the top of my hand? Yeah...I'd JUST pulled them down. They aren't really long enough. Neither is the body. I have this problem constantly with shirts because of my height (5'11"). I'll likely add some kind of fabric to the bottom of the sleeves and the bottom of the body to make them longer. But that will wait for some other day. And be a separate tutorial of it's own.
I'm sorry this one was so long! There were several steps involved, though. And, to my defense, the shirt was NOT hard to do at ALL. The longest parts: deciding what I was going to do, waiting for the shirt to go through the washer and dryer, and waiting for the paint to dry. If I had already had a clear idea of what to do, or could/did print up my design on the paper instead of having to sketch it by hand, and if I take out washing/drying and paint drying time it probably took an entire 1.5 hours to do. The next one I do will be WAY faster, and probably (hopefully) look better. But I like it a lot! I'll be wearing it every chance I get, I'm sure! :-D
Posted by 3Giraffes at 8:00 AM