The idea for this dress has been kicking around in my head for a while. I've been working on the pattern for sizes newborn through adult to not only use myself, but also to sell the pattern. I have the pattern nearly ready for testers. Actually, I have had it nearly ready for a while, then my computer broke. Once it got fixed I never finished making the digital pattern. I will one of these days, but it just might have to wait till after the holidays! This time of year is crazy as it is, but add in my in-laws being in town and my husband finishing up, graduating from, and taking the state exam for police training it's been even crazier! (He's already a corrections officer. Now he will be dual certified! YAY!) 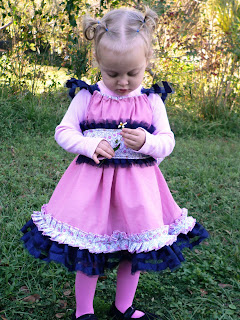 For the dress my daughter is modeling I made it completely reversible. This is NOT what I'm going to do for the ones that I sell. As nice and cute as it is, it's just so much more work! It's literally 2 dresses in one.


On one side there is a solid pink with accents of a navy organza that has stripes alternating between sheer and solid. It almost looks like ribbons sewn together. It also is accented by a white fabric that has tiny flowers and fruit of some kind. I'm calling them cherries, my mom says they are apples. Whatever. They are all outlined in navy though, so the navy fabric is tied in nicely!

The pink fabric, in true 3Giraffes style, is upcycled. It used to be a curtain! The navy organza is left over from some costume making from years ago. And the flowery stuff is new. 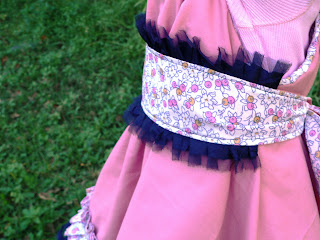 The belt is two sided - one side is the solid pink and the other side is the flowered fabric. The navy organza is pleated at the top and bottom edges. Turn the belt around and you get a different look! How great is that?


The belt is also extra long. That way I could get a nice large bow.

The pleats for the ruffles are aaaaalllllll done by hand. I don't have a special foot on my machine that can pleat the fabric as I sew it down. So while the pleats are mostly even, there is some slight variation throughout. The fluttery sleeve is also hand pleated.


The reverse side of the dress is the flowery fabric as the main part. I flipped the belt over to be the pink side showing. There is also a flowery pleated ruffle at the hemline above the navy ruffle.


The back part on the flowery side splits open to reveal the pink layer underneath. The pink layer has two rows of navy pleated ruffles. This makes the dress have more volume. Not that it needs it...this dress is perfectly twirlable without the extra ruffles! Lets face it, the ruffles also add cuteness. :)


The neckline in both the front and back have elastic inside so that it is comfortable and easy to put on and take off. The front of the dress also has elastic at about the empire level to help ease it in a bit since this is a very voluminous dress! 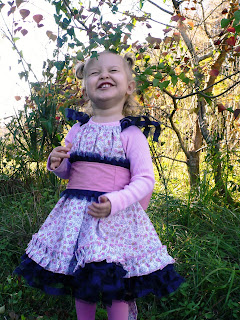 And one last picture because it's cute and funny. I tell her to open her eyes....so she squeezes them shut so tight her face scrunches up! HA! Goofy girl. So, I won't be selling this dress as a reversible one, until further notice, because of how much work it is to make TWO dresses in one like that. And how much fabric! Wowzas! Unless it's requested especially. But I will be making  the same style dresses for sale as individual dresses. They will only be made to order, and I will have more fabric choices than what there is here in the future. But for now this is the only listing and fabric choice available!
Posted by 3Giraffes at 8:00 AM