Sooo this is one of those use what you have meals that turned out to be a success. And I'm calling it Experiment 626 Chicken Verde for a couple reasons...one is that for the last 11ish years I've been making experiment dinner after experiment dinner...so who knows what number it should really be?! And also, my 2 year old is obsessed with monsters. Monsters Inc is her favorite, but she will settle for Lilo and Stitch or Monsters VS Aliens, or even The Lorax....as long as he's called an orange monster. ;-)
We had a green pepper (actually 2, but i only used 1) and an onion that both NEEDED to get used, or they would be tossed in the trash soon. You know the kind - sitting in the veggie drawer for just a little too long, doesn't look all pretty and fresh anymore, but not quite to the point of growing its own fur coat. Still useable.

And dinner had to get made. And we didn't have anything thawed for making tacos or spaghetti (what we usually use the peppers for), but we had chicken ready to go.
And to be honest, taking pictures was kinda an after thought. More of an "if this works I want to know what was in it again" sort of thing. So I'm sorry for their poor quality (my phone's camera) and their lack of quantity (like I said - after thought). 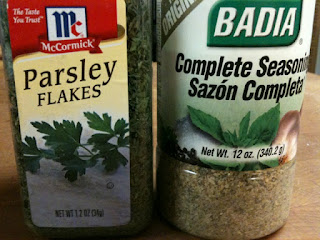 I cut open the green pepper and removed the seeds, then diced it into roughly 3/4" pieces. Then dice up the onion. Put it all in a food processor with about 2 tbs mustard, 1.5 tbs parsley flakes, and a generous amount of the seasoning. 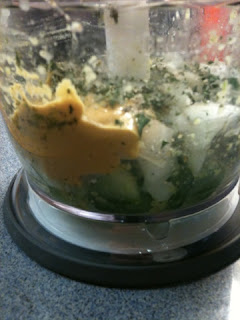 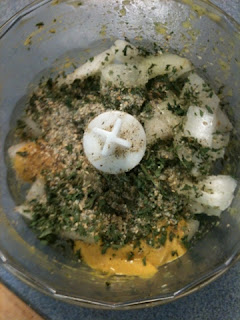 Blend until it is fairly smooth, but still has bitty bits of chunkiness to it. Kind of like a pesto consistency. 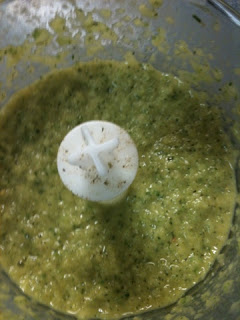 Cut up the chicken into large chunks and put into a dish. Pour the "sauce" on top to cover it all.
Bake uncovered at 350 degrees for 40 minutes. 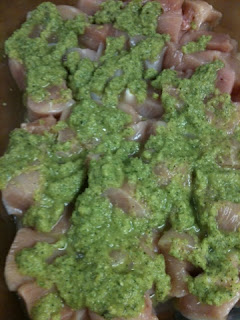 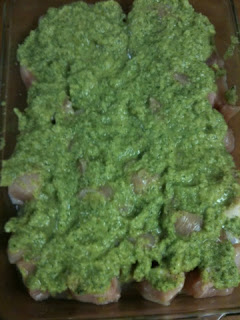 I served it with linguine and Alfredo sauce. But I think it would be great with some rice and corn too. Or something else. :-) 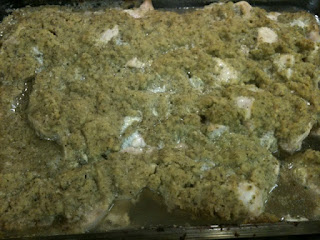 I don't know if you can tell, but there is a lot of juice in the pan. I didn't use any oil or anything, and I cut off about 98% of the fat from the chicken, so it's just all natural juices. And it tastes really yummy. Would have been good poured onto some rice.
Posted by 3Giraffes at 8:00 AM